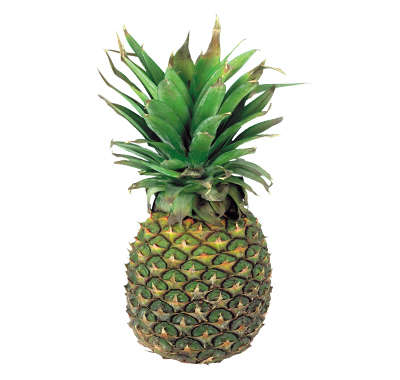 Pineapple is a quintessential tropical fruit, evoking images of relaxing beaches, swaying palm trees and refreshing umbrella-topped cocktails. The fruit is well liked in India, though it is not a feature of many dishes as it is in other Asian countries like Thailand and Malaysia.

As explained in the book, “History of Food,” Pineapple’s origin is Brazil and Paraguay. Europe’s first knowledge of the fruit came about when Columbus came to Guadaloupe in 1493, and word since spread to the Spanish and Portuguese voyagers. When the Spanish brought the pineapple to Charles V during his reign between 1500 and 1558, he found the fruit utterly disgusting (partly due to its spoilage while in transit).  Like so many other fruits, however, it quickly became en vogue in Europe’s aristocratic green houses by the late 18th century.

India has grown the fruit for centuries: In 1548, the Portuguese traders brought seeds to India after visiting the nearby Indonesian islands. In fact, missionaries from Australia first imported their plants from India’s soils during the early 1800s.

Pineapple has a number of recognized health benefits, both in pharmacology and traditional medicine.

According to a Purdue horticulture article, pineapple has been used traditionally to act as a diuretic and induce labor. The juice is gargled to remedy sore throats and seasickness. Young, unripe (and subsequently toxic) pineapples act as a vermifuge but should not be eaten by pregnant women, as the unripe fruit may induce miscarriage. Unripe pineapple is also believed to treat venereal diseases. In Africa, the roots treat edema, and pineapple rind with rosemary treats hemorrhoids.