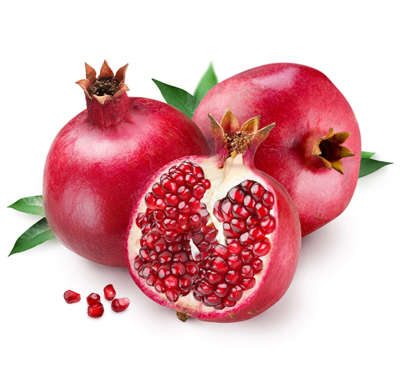 Grade B is out of stock
Description Benefits
Pomegranates have wonderful history and lore, predating the Bible. Some Jewish scholars believe it was not the apple that tempted Eve in the garden, but pomegranate. Just as the serpent lured Eve with a pomegranate in the Bible, so too did Hades trick Persephone into a bite—as such, she had to spend every winter in the underworld.

Despite pomegranate’s rocky start as the fruit responsible for man’s fall from grace, it has since gained a solid reputation in many religious texts. In Hinduism, the fruit symbolizes fertility and prosperity, and the Qur’an states that pomegranate trees grow in the kingdom of heaven. As for the Jews, the book of Exodus explains that the image of a pomegranate should be worn on the robes of the High Priests.

India grows most of the world’s pomegranates, and exports much of its supply to the United Arab Emirates, Oman, and the UK. India even ships pomegranates as far as the US and Canada. The country’s main export competitors are Spain and Iran.

Pomegranates have been used in Ayurveda for centuries. According to the book, “Ayurvedic Healing Cuisine,” pomegranates treat dysentery, diarrhea, heartburn, vomiting and dyspepsia. It also purifies the mouth, stomach, heart, throat, as well as increase semen, boost virility alleviate restlessness and reduces thirst.

A Purdue horticulture article explains that pomegranates have been used by various cultures to treat several illnesses: Pulverized flowers alleviate bronchitis; the bark, leaves and rind treat hemorrhages; in Mexico, a concoction of flowers alleviates inflammation when gargled. The leaves, seeds and roots also have hypotensive and anthelmintic activities. One of the oldest medical documents discovered in Egypt lists pomegranate as a treatment for tapeworm and parasites.