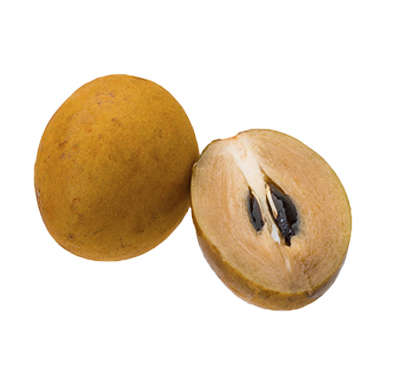 Grade B is out of stock
Description Benefits
Julie Morton writes in her book, “Fruits of Warm Climates” that sapotas most likely came from the Yucatan peninsula of Mexico, northern Belize, and the northern regions of Guatemala. Though sapodillas have been harvested since ancient times, the fruit didn’t come to Sri Lanka’s soils until 1802. Despite sapota’s relatively late arrival to India, the fruit has since flourished.

Today, Sri Lanka, Pakistan, Mexico, Central and South America, Palestine, and the Philippines grow chikus commercially. The fruit has some recognition in the tropical parts of Florida in the US, but sapodillas are relatively unknown throughout temperate North America and Europe.
Indian sapodillas are some of the hardiest in the world. Sapotas grow in abundance throughout Karnataka, Maharashtra, Gujarat, Tamil Nadu, West Bengal, and Andhra Pradesh. According to 2010 figures published from the National Horticulture Board, sapota orchards cover approximately 160,000 hectares. Almost 30,000 hectares are located in Karnataka-- the top producer of sapotas in the country, yielding 353,000 metric tons. The second highest producer is Maharashtra, growing 70,000 hectares and producing 98,000 metric ton. Although Gujarat only dedicates 27 hectares, their output is a staggering 272 metric tons of fruit.